Cycling in the Headington Area

​In 2005 James Bloice Smith of Headington Action gave a presentation at the North-East Area Committee about Headington’s cycle lanes. This highlighted both the inadequacy and downright uselessness of many of the existing cycle lanes, and helped motorists appreciate just how difficult life can be for cyclists.
London Road North
Pavement cycle lanes are unpopular with pedestrians, but they are disliked by most cyclists as well. Although the county council would like them to be one-way and have painted cycles on them to suggest the way that cyclists should ride, these pavement lanes are outside the scope of the Highway Code and nothing can be done to stop cyclists from cycling in both directions on them.
But pedestrians are not blameless either, and often do not keep to their section of the pavement. When you emerge from Sandfield Road and want to turn left, theoretically you have a choice of two cycle lanes, a wide one on the pavement and a narrow one on the road. But here, as is often the case, pedestrians are in the pavement cycle lane: 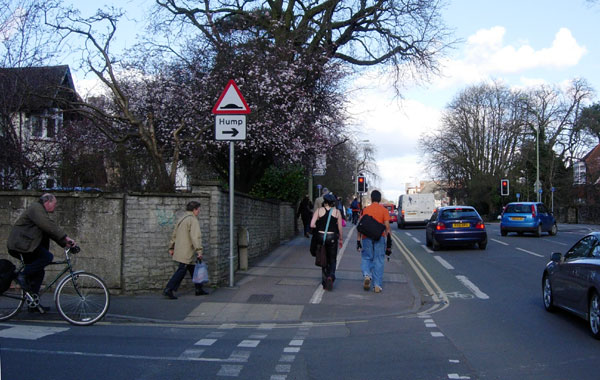 If you choose the pavement option, you soon reach the stop-line shown below. After this line (as the sign on the left shows), it is a free-for-all at the bus-stop. (Note that traces of the useless pavement cycle track that used to wind around the bus-stop can still be seen.) 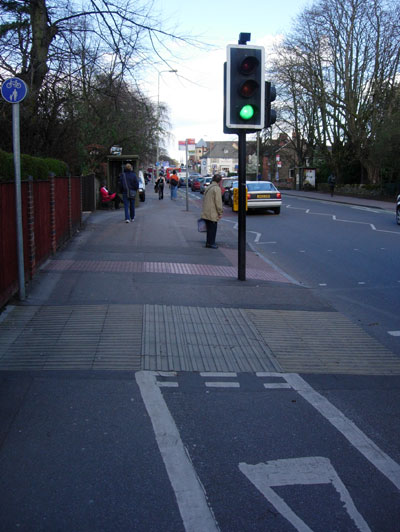 The next picture shows the continuation of the twin lanes after the bus-stop. Note that this section of the cycle lane commences with a stop line, for the benefit of those cycling the wrong way. 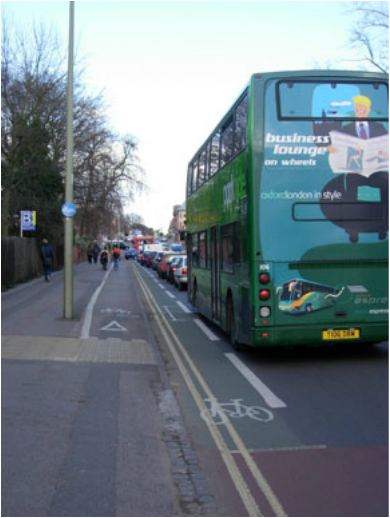 When you approach the Green Road roundabout, there is a curious small yellow hatched area by this bus-stop. Presumably neither cyclists nor pedestrians are allowed to enter it unless their exit is clear: 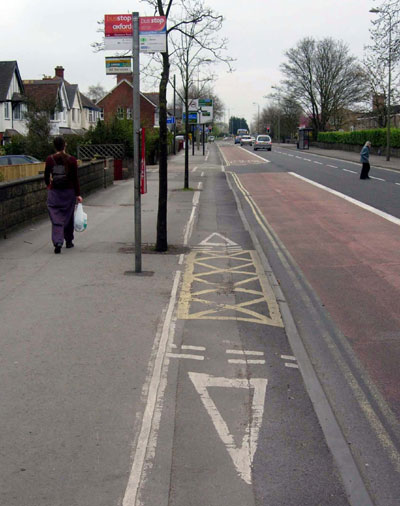 When you finally reach the Green Road roundabout, the signs show that you are allowed to cycle under the subways. This is a time-honoured concession originally granted to Cowley car-workers cycling from Barton. There are no markings, however, and cyclists and pedestrians have a dangerous free-for-all, with broken glass usually adding extra excitement.